As we prepare for the Second Half of the 2017 Southern League season, we thought it’d be timely (and fun) to look back on some of the highlights from the First Half. This is not a complete list – we encourage you to comment below on what moments you enjoyed, and you are more than welcome to Tweet at us (@JacksonGenerals) or email us (JacksonGeneralsBroadcast@gmail.com) with memories of your own. 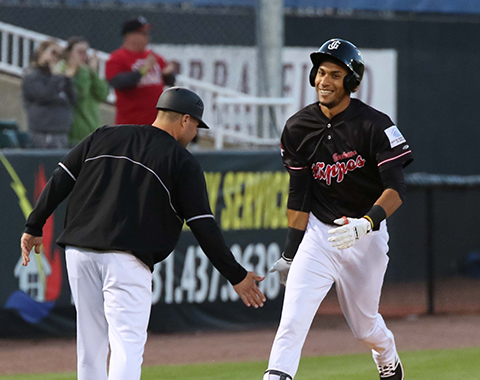 Generals outfielder Victor Reyes made a difference in his second Double-A game, playing a key role in a 3-2 victory over the Barons. Reyes hit the Generals’ first home run of the year over the right field fence, a solo shot that proved to be the difference in the game. Birmingham put the tying run on base in the ninth inning, but Reyes and infielder Dawel Lugo combined for a fantastic game-ending relay to home plate that gunned down the runner as he tried to score on a single to deep right-center field. The win was the first for the Generals as their Friday night alter-ego, the Hub City Hippos.

Return of the Home Run King 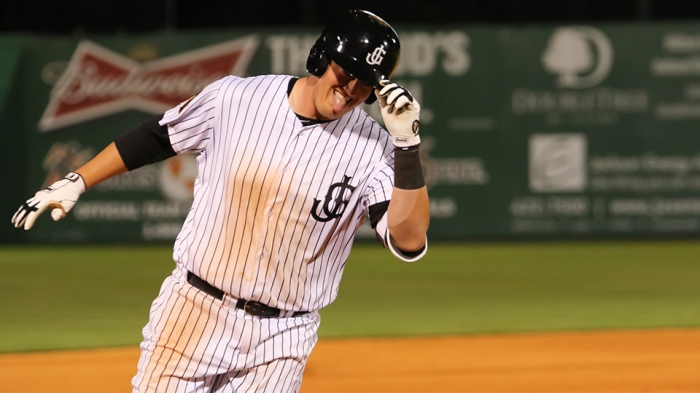 In the third game of the year, Generals first baseman Kevin Cron* blasted three home runs out of The Ballpark at Jackson, joining Steven Proscia, Carlos Peguero, and Charlton Jimerson as the only Generals players to accomplish that feat in the past decade. Cron’s first bomb, off highly touted right-hander Michael Kopech, came on a 98-mph fastball and ended up 450 feet over the fence in left-center. His third jack of the game tied the score in the bottom of the ninth, pushing the Generals and Birmingham Barons into their first extra-innings game of the year. Cron, the 2016 Southern League leader in home runs, led the league in dingers through May.

Stinging from an 8-7 extra-innings loss the night before, the Jackson offense unloaded on Birmingham in a 20-5 blowout on Sunday afternoon. Led by multiple homers from both Dawel Lugo and Stewart Ijames, Jackson did all of its scoring in the first seven innings, tallying 18 RBI and 22 hits, 12 of which went for extra bases. The Generals’ six home runs fell one bomb shy of the Southern League record. Jackson recorded their highest run total since August 7, 2009, when the West Tenn Diamond Jaxx took down Carolina, 20-9. The 22 hits from J.R. House’s squad is the highest hit total for a Generals team since May 10, 2006, a 25-hit effort in a 15-1 drubbing of Mississippi.

Facing a 7-3 deficit with six outs to go, the Generals mounted an improbable comeback, scoring five runs in the last two innings for an 8-7 walk-off win. Generals outfielder Kelly Dugan started the four-run eighth inning with a sacrifice fly, and he finished the game with a two-out ninth-inning broken-bat double into the right field corner that scored catcher Michael Perez from first base.

Batting for the second time as a minor leaguer, Generals left-handed pitcher Gabe Speier used his first swing as a professional to crank an opposite-field solo home run in Biloxi. The April 22nd dinger was the first by a Jackson pitcher since August 9, 2006, when reliever Bobby Brownlie homered in the 11th inning of a 7-3 West Tenn Diamond Jaxx victory over Jacksonville. Speier out-did Brownlie, too: both men got the win in their respctive games, but Speier threw 3.1 scoreless innings of relief, while Brownlie only notched 3.0 innings. 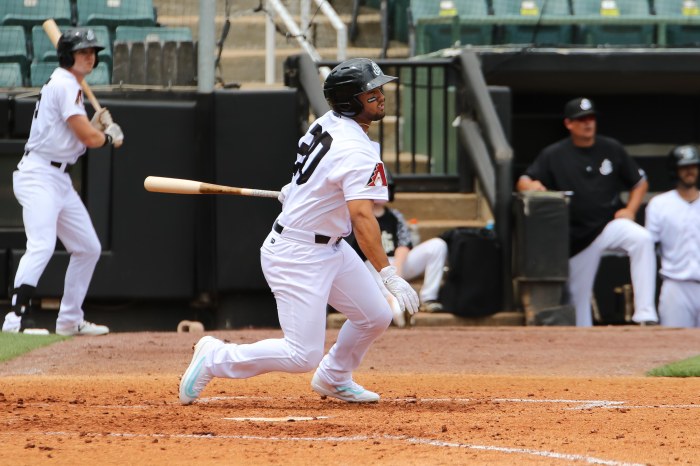 After starting in a 6-for-50 rut, Generals second baseman Jamie Westbrook erupted on April 24th with a slump-busting 4-for-5 night at Biloxi. Westbrook’s first two at-bats consisted of an RBI double to left and a two-run triple to center field, but he wasn’t finished. In the fifth inning, the Chandler, Ariz. native doubled to right, marking his first game with three or more hits on the season. In the sixth, Biloxi retired the first two batters before Rudy Flores* and Victor Reyes connected on consecutive doubles. Westbrook, batting next, doubled again to right, scoring Reyes. The double was Westbrook’s third of the night and the third in a row in that inning. Westbrook’s rebound from the slump was a week-long fast-break: he won Southern League Player of the Week honors on May 1st after a 13-for-27 week at the plate. He celebrated that afternoon by hitting his first homer of the season, taking Chattanooga’s Felix Jorge deep in a 12-pitch at-bat.

SATURDAY, MAY 13th VS. PENSACOLA

Facing Pensacola ace right-hander Tyler Mahle, the Generals came up with an impressive 3-0 victory in front of a big Saturday night crowd. Mahle, less than one month removed from throwing a perfect game, allowed a solo home run to Rudy Flores* in seven innings of work. Jackson right-hander Brad Keller out-dueled him, holding the Blue Wahoos scoreless over six innings. Kevin Cron* and Dawel Lugo also added solo home runs in the eighth and ninth innings to put the victory on ice, handing Mahle his first defeat of the year.

FRIDAY, MAY 19th AT MONTGOMERY

After an 11-6 victory the night before, the Generals offense ate up the Montgomery Biscuits in a 17-5 feast, garnering two grand slams in the process. Generals outfielder Kelly Dugan and designated hitter Rudy Flores* each hit home runs with the bases loaded, marking the first time a team had slammed twice in the same game since current Houston Astros outfielder Jake Marisnick hit two grand slams by himself in an 11-2 Jacksonville victory at Pensacola on May 30, 2013.

SATURDAY, MAY 27th AT JACKSONVILLE

Generals hurlers Taylor Clarke*, Joey Krehbiel*, and Gabriel Moya* combined to retire 20 Jacksonville Jumbo Shrimp on strikes in a 4-2 nine-inning comeback victory. Clarke set a career high with 12 punchouts, while Krehbiel added five, a season-high among Generals relievers at that point. The 20-K effort fell two strikeouts shy of the Southern League record (22), which was most recently tied by Jackson in a victory over Chattanooga on April 21st, 2014. Moya had the chance to tie the record, but the final two outs of the ninth inning were recorded via groundout and flyout. Jacksonville led 2-0 until the eighth inning, but the Generals rallied with five hits in the final two frames to overtake the Jumbo Shrimp.

Generals second baseman Colin Walsh* reached base safely in a team-best 22nd straight game, making his streak that began on May 10th one of the three longest tears in the Southern League at that time. Walsh went 18-for-63 with five extra base hits and a wondrous 31 walks. Walsh’s walk total (55 through June 2) led all players in the affiliated minor leagues and Major League Baseball. Walsh won the Southern League’s first Player of the Week honor in 2017 by hitting .371 over the first nine games of the year, recording two home runs and seven doubles in that span.

The Force Is Strong With Fans

Wearing Star Wars-themed jerseys adorned with movie character Admiral Ackbar, the Generals played a riveting series finale against the Mississippi Braves in front of a season-high 6,224 fans. The Generals dropped a 4-3 contest, but the crowd was treated to a rousing post-game fireworks show and lots of promotional segments that paid homage to the famous sci-fi film franchise.

In the longest game of the year to date, the Generals bested the Lookouts 4-2 with the help of nine scoreless innings from their bullpen. Right-hander Joel Payamps allowed just two runs in his five-inning start, but a five-man relief corps of Miller Diaz, Joey Krehbiel*, Jared Miller, Gabriel Moya*, and Yuhei Nakaushiro held Chattanooga scoreless thereafter. A sacrifice fly from Dawel Lugo and an RBI single by Kelly Dugan helped the Generals pull ahead in the top of the 14th inning. Nakaushiro got the final three outs just before midnight in a four-hour, 17-minute contest.

Did somebody say “Biscuits”, or was that my stomach growling? Either way, it’s breakfast time, and we’re here to bring you a first look at the Generals’ second home series of the year!

After ten games in 2017, the Jackson Generals (8-2) hold the high ground in the Southern League’s North Division as they await the arrival of the Montgomery Biscuits (5-5). New manager J.R. House has found multiple ways to coax wins out of his team so far, and that’s in part because the roster has already changed.